Christ and His Church 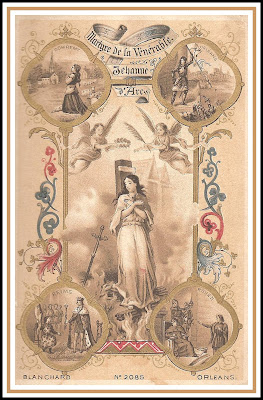 
About Jesus Christ and the Church, I simply know they're just one thing, and we shouldn't complicate the matter.
– St. Joan of Arc

I got the pic from Our Lady's Tears, who in turn got it from Holy Cards for your Inspiration
Posted by Athanasis Contra Mundum at Friday, May 30, 2008 No comments:

Labels: Saints, Thought of the Day

I have posted about Captain Catholic before. Those were about the short sketches that Tony DeGennaro uploaded to the internet. He made a movie a while back. I haven't sat down to watch the whole thing yet, but it looks like its just under an hour. From the preview it seems to have combined all the villains from Episodes I-III.
In the meanwhile since the release of his movie, Tony has also released Episode IV. Episode IV is on the Catholic position about immigration, illegal or otherwise. I plan on reviewing the movie and Episode IV later on, but for now that will have to wait until I have time.

Here are the links to the Episodes:
0
I
II
III
IV
Posted by Athanasis Contra Mundum at Monday, May 26, 2008 No comments: 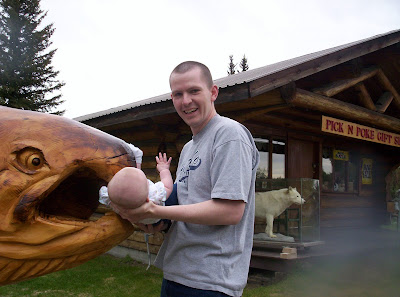 Here's a picture of my daughter and I having some fun at the park.
Posted by Athanasis Contra Mundum at Monday, May 26, 2008 1 comment:

I have not posted in quite some time. I realize that I have probably lost some frustrated readers. I am sorry for that.
Ihaven't had much free time from work lately, to say nothing of the time a baby demands.

On another note, I have discovered an app on facebook for charitable causes. For those of you who are on facebook, there are many worthwhile causes, Catholic and otherwise, to join. For instance, there is a Serra International cause you can join or donate to. There is also the Missionaries of the Holy Spirit, an order that I have posted about before along with posts about their foundress. Again with that order you can join or you can donate.
Posted by Athanasis Contra Mundum at Sunday, May 25, 2008 1 comment:

I have been terrible about keeping up with the Catholic Carnival. However, here is this weeks Carnival.
Posted by Athanasis Contra Mundum at Sunday, May 04, 2008 No comments:

Thank you to Rachel, for pointing out that Friday was the feast day of St Athanasius. I know that I am late, but it deserves mention. Next Sunday is Pentecost, the feast day of this blog.
Athanasius is a personal hero of mine. His heroic tenacity in teaching Christ's true nature in spite of everything is an inspiration, to say the least.
Athanasius contra mundum
Posted by Athanasis Contra Mundum at Sunday, May 04, 2008 No comments: