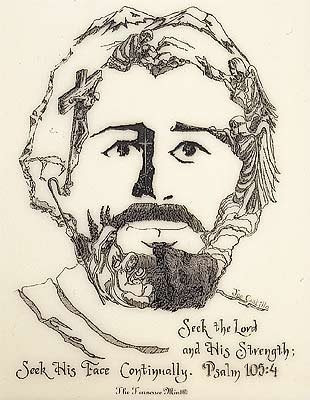 Posted by Athanasis Contra Mundum at Saturday, August 30, 2008 No comments:

I don't write many personal posts. I am a private person, but I saw a mention to Paulcaholic (author of Sober Catholic) on Adrienne's blog and remembered her series about the 12 Steps of AA and I was inspired to write. Longtime readers will notice this is considerably longer than most posts. Sorry, I tried to keep in mind as Laertes quipped that "[b]revity is the soul of wit."

As some of you might know, I don't drink. I mentioned it in passing once before on this blog. I made the conscious decision to stop drinking. I never went to meetings nor was I ever confronted by anyone about the problem. I decided one day that enough was enough.
Before I get much further let me just state that I have nothing against alcoholic drinks per se or against the people who drink them. For instance, I am happy for Bill and the Saint for their new found mutual appreciation of beer. Btw, Happy Birthday Bill! Not to mention that the Savior chose for His Body, Blood, Soul, and Divinity to appear in the guise of wine. I believe that alcohol is not evil as it was created by the Lord, but what we do with it can easily become sinful.
I quit drinking once before in college after having blacked out. Its never good to have to have your friends tell you what an a@# you made of yourself. That lasted about six months and I was back at it.
Then after I graduated college and I had gone to the Pre-Theology program at Mt Angel. I think many parishioners would be scandalized to know how much some Seminarians drink. I didn't have a car so I didn't get out to bars and drink as much as some, but the socials that were held always enough and I wasn't shy about getting tipsy or worse. Most of the others were responsible but myself and a few others were not.
At a fancy dinner for something or other (we were always having nice dinners, so between them blurring together and my blurred memory I don't recall what it was for) I started out outside with about 4 or 5 glasses of wine and a beer. Then we went inside and kept going strong.
I'll just say about the events that followed that no one important found out and that I made a fool of myself. Of course this lead up to a RAGING hangover the next morning. I was so sick and hurting so bad that I skipped morning prayers and daily mass. I barely managed to get myself to class.
Everyone in class could see my color and tell that I was very ill. Most knew why.
Strangely, I didn't decide to quit then. But that night was the last time I drank. A few months later when I had left the Sem and I was making a Eucharistic Visit at a parish near my hometown, I remembered that I had quit before, realized again that I have a problem, and that I had promised as penance that I would swear off the stuff and I resolved to do it for good this time. I prayed for the Lord's help because I knew that I couldn't do it alone; I had already tried that.
The difference this time is definitely my wife. I met her about 2 or 3 months later and since I have known her she has always been VERY supportive of my resolution. No one actively supported me before, but she has since I have known her. There are many reasons why I thank God for her and this is one of them (not a small reason either).

And as St Paul warns us in Ephesians 5:18, "And be not drunk with wine, wherein is luxury; but be ye filled with the Holy Spirit"
Posted by Athanasis Contra Mundum at Saturday, August 30, 2008 4 comments:

For all the talk of our energy dependence upon the Middle East, I think it is notable that only 1 of the top 5 sources of oil in the US is from the Middle East. I got this table from the Energy Information Administration which is part of the Department of Energy.
...and yes, that is right. Canada really is our #1 source of oil.
So of the top 10 sources of oil, only 2 are in the Middle East (3 if you count N. Africa as Middle Eastern). And of the top 15 only 3 are on the Arabian Peninsula and 6 are Muslim countries. While on the other hand, 2 of our top 3 are right next door and 5 of the top 15 are in Latin America.


Posted by Athanasis Contra Mundum at Friday, August 29, 2008 No comments:

A random bit of trivia here, The CSS Shenandoah (yes, CSS as in Confederate States Ship) was the only Confederate ship to circumnavigate the globe. It also raided Union commerce in the Bering Strait of all places.
Posted by Athanasis Contra Mundum at Thursday, August 28, 2008 No comments:

The first known married Baptist minister turned married Catholic priest is about to be ordained (September 6).
David Harris is the only man to be ordained as a priest in the Archdiocese of Louisville this year and only the second Protestant convert ordained as yet in that Archdiocese.
The article is here.
One part I found very interesting about the article:

His wife and sons remain Baptist, but support him, as do other relatives.

"I'm real happy for him," said his brother, Mike, of Louisa. "My brother has always had a fantastic heart for people."

David Harris said his mother had the most difficulty with his conversion.

"We talk about it, we pray about it," he said. "At this point she's real supportive."

It has to be an awkward family life. Dad/Husband is a Catholic priest while everyone else is still Baptist.
Posted by Athanasis Contra Mundum at Thursday, August 28, 2008 No comments:

Holy Card of Me Meme

Therese tagged me for the Holy Card meme.
What picture would I use for my holy card, should I make it to sainthood, and of what cause(s) would I want to be patron of? 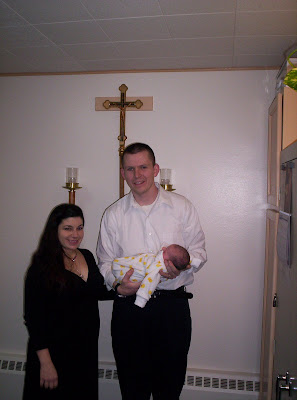 I would want to be patron of Soldiers and military families. I should probably also put myself down for patron of procrastinators, but I'll do that later.


If you look at a Saint of the Day site, you would know that today is the feast day of Saint Bernard of Clairvaux. He is a great reformer and a Doctor of the Church, but today is also the feast day of Saint Christopher.
In case you didn't know, his name is Greek for "Christ Bearer". That is because according to his biography he literally carried the Christ child accross a river. However, it can apply to us Christophers today in a more metaphorical sense. We may never carry around God Incarnate, but we can carry Christ spiritually to others and to the world at large. Its a very missionary name when you stop to think about it.
Posted by Athanasis Contra Mundum at Wednesday, August 20, 2008 2 comments:

Labels: Saints, Thought of the Day

As I was writing the post about St Christopher, I looked for pictures and I found the picture displayed in the St Christopher post. I like the portrayal of St Christopher and the Christ Child, but I wondered who are the saints on the right and left.

Because the picture is actually the center panel of a triptych (Moreel Triptych), I was able to look up info on it and identify the Saints as Sts Gilles and Maurus. I know that St Gilles was a hermit and he took an arrow for a beloved deer who kept him company, but that's about all I know. I don't know anything about St Maurus.

I will probably look up these two later, but if you are like me you have to know who the saints are and what is significant about their iconography.

Posted by Athanasis Contra Mundum at Wednesday, August 20, 2008 No comments:

Posted by Athanasis Contra Mundum at Monday, August 18, 2008 No comments: 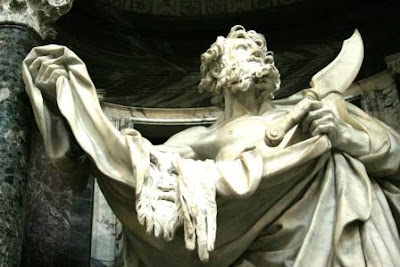 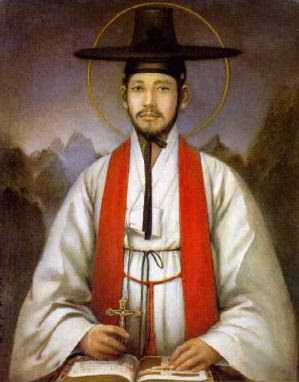 The patron saint against oversleeping.

I, like everyone else I bet, doubt from time to time the Catholic faith and even God himself. But I some relief in knowing that even the apostles doubted. In today's Gospel reading, Peter doubted as he walked out on the water toward Jesus and he almost drowned. At the end of Matthew it says that the eleven were on a mountain worshipping Jesus, but some doubted. I mean they saw all the miracles. For crying out loud He was even raised from the dead, but still they doubted. Even still He chose these doubters as apostles. There's hope for me yet.
Posted by Athanasis Contra Mundum at Monday, August 11, 2008 2 comments:

This time I didn't leave the name of the saint as part of the file name. 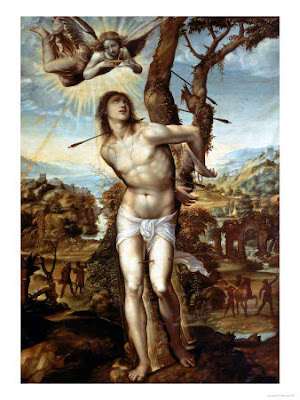 Not surprisingly this Saint is the patroness of breast cancer sufferers. 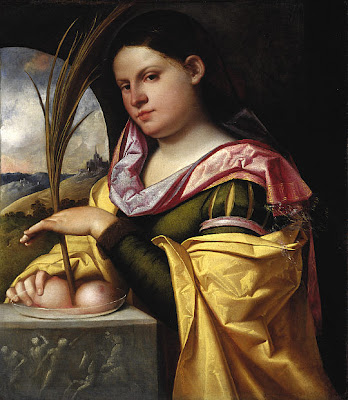 Not sure what to think of this 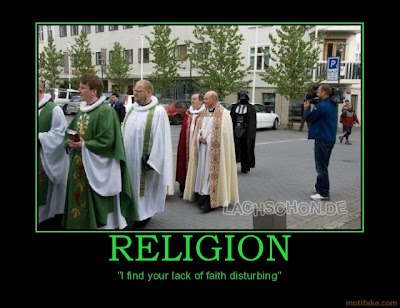 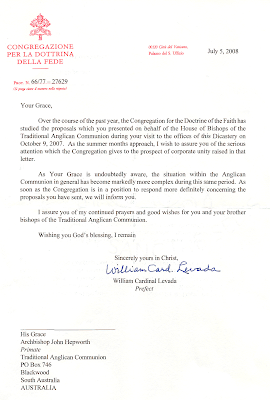 I found this letter on the for the Traditional Anglican Communion. Its only a few paragraphs so I will not quote it here.
Posted by Athanasis Contra Mundum at Friday, August 08, 2008 2 comments: