Gilligan's Island based on the Seven Deadly Sins

Creative Minority Report posted that the cast of Gilligan's Island were each based on one of the Seven Deadly Sins. The breakdown went like this:
The Professor – Pride
Thurston Howell III - Greed
Ginger - Lust
Mary Ann - Envy (of Ginger's looks)
Mrs. Lovey Howell - Gluttony
The Skipper - Anger or wrath
Gilligan – Sloth
If that's true it makes me feel bad for laughing. I think its a bit of a stretch though. For instance, Mary Ann never seemed especially envious.
The article is here. You can judge for yourself.

I started going to a local Melkite Catholic parish and when I saw this on Byzantine, Texas I knew that I had to post it. 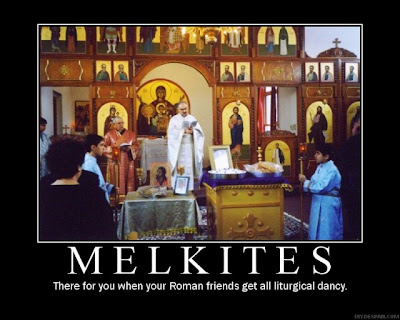 H/T to The Crescat by way of Byzantine, Texas.

Posted by Athanasis Contra Mundum at Monday, June 21, 2010 No comments:

As I look back on the baptism classes I went to before my daughter's baptism, I remember a lot of talk about the role of parents in leading children to a closer relationship with God. However, as I have found out since her birth, that is a two-way street. She's only two so we don't yet have in depth conversations on Theology or the nature of God, but Fatherhood has opened my eyes and made me understand much of Christ's and the Church's teachings and explanations more vivid to me.
Writing this the first thing that comes to mind is the repeated references to the First Person of the Trinity as Father. I understand in a way that was not clear before how much more than I do, God the Father knows what's best for me. Any parents out there know immediately what I am talking about. I know its best for my daughter to go eat fruits and veggies instead of cookies, but she doesn't see it that way. For that matter, I am realizing through her how selfish I am when it comes to what I think is best vs. what the Father tells me is best. She is a wonderful little girl, but after all she is 2 and still doesn't think about much outside of herself.
As a Dad, I can understand now much better the level of love that the father had for his prodigal son. I understood the parable before, but feeling that powerful, unconditional love for my daughter has made it much more real for me. I couldn't imagine not taking her back if she were the prodigal daughter.
The other thing that jumps to my mind as I type this was an example from Story of a Soul. She compared a child who knows that the father is removing things that might trip the child vs a child unaware of the father's actions. The child who knows is more grateful, because the child who is unaware does not know that it happened in order to be grateful. After many times leading my daughter away from harmful things such as tripping hazards, I am realizing everyday that our Father removes many more things from my path and leads me away from many dangers I would have otherwise fallen into. I am grateful, but again the example has become much more vivid as a father.
I think the best example of how much having a daughter has taught me, was the other week at St Ignatios parish here in Augusta, GA. As my daughter and I left church and older lady from the parish remarked that with her penchant for pretty dresses, pretty hats, shoes and purses she is going to be expensive. I replied that "She is worth every penny." The lady said, "Think how much more the Father feels about us."
St Joseph and Joachim, pray for us.

Posted by Athanasis Contra Mundum at Sunday, June 20, 2010 No comments:

He is that Important

I have never liked the new "Common Era" and "Before Common Era" schema for marking the years. First of all, it obviously offends me as a Christian to see and hear people try to erase anything to do with Jesus from our day to day lives. Secondly, He is still the marker for years you just changed the words at the end of the number. Oh yeah, and btw you are also using a calendar made up by the Catholic Church and named after a Pope.
With that in mind the following picture from The Stained Glass Buffalo about sums it up: 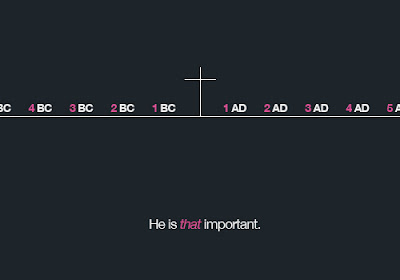 Posted by Athanasis Contra Mundum at Friday, June 18, 2010 No comments: 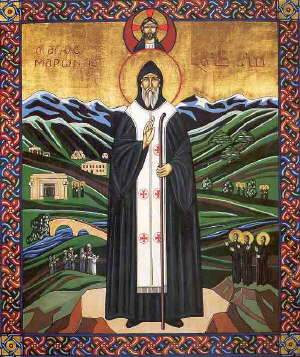 Obviously that is Jesus at the top, but who is the Saint beneath him?
Hint: He is popular in Lebanon.

I have noticed some traffic coming here looking for Fr Ben Uhlenkott's blog. The address for that is http://missioninmorelia.blogspot.com
On a totally unrelated note, I will delete all comments on 50 Days After that are not in Latin characters and not in a language I can read. I have had repeated spam comments with Chinese characters that lead to site of questionable intent.
Peace,

Posted by Athanasis Contra Mundum at Friday, June 11, 2010 No comments:

Archbishop Broglio, as the Archbishop for the Military Services has published a statement on homosexuals in the military asking Congress not to allow open service:

In a response to a request from the Chiefs of Chaplains of the Armed Forces I communicated some considerations and concerns regarding the proposal to change the existing legislation regarding persons with a homosexual orientation in the military. In fulfilling my role as the chief shepherd of Catholics in the United States Armed Forces, I have had the opportunity of visiting many installations in the recent past. A number of chaplains and commanding officers have expressed concerns about the effects of a change. There is a request for guidance.
The teaching of the Catholic Church is clearly expressed in the Catechism of the Catholic Church:


2357 Homosexuality refers to relations between men or between women who experience an exclusive or predominant sexual attraction toward persons of the same sex. It has taken a great variety of forms through the centuries and in different cultures. Its psychological genesis remains largely unexplained. Basing itself on Sacred Scripture, which presents homosexual acts as acts of grave depravity,140 tradition has always declared that "homosexual acts are intrinsically disordered."141 They are contrary to the natural law. They close the sexual act to the gift of life. They do not proceed from a genuine affective and sexual complementarity. Under no circumstances can they be approved.

2358 The number of men and women who have deep-seated homosexual tendencies is not negligible. This inclination, which is objectively disordered, constitutes for most of them a trial. They must be accepted with respect, compassion, and sensitivity. Every sign of unjust discrimination in their regard should be avoided. These persons are called to fulfill God's will in their lives and, if they are Christians, to unite to the sacrifice of the Lord's Cross the difficulties they may encounter from their condition.

2359 Homosexual persons are called to chastity. By the virtues of self-mastery that teach them inner freedom, at times by the support of disinterested friendship, by prayer and sacramental grace, they can and should gradually and resolutely approach Christian perfection.


Consequently, those with a homosexual orientation can expect respect and treatment worthy of their human dignity. The prohibitions regarding sexual harassment and intimidation refer just as much to homosexuals as to anyone else. However, unions between individuals of the same gender resembling marriage will not be accepted or blessed by Catholic chaplains. Furthermore no restrictions or limitations on the teaching of Catholic morality can be accepted. First Amendment rights regarding the free exercise of religion must be respected.
This means that Catholic chaplains must show compassion for persons with a homosexual orientation, but can never condone—even silently—homosexual behavior. A change might have a negative effect on the role of the chaplain not only in the pulpit, but also in the classroom, in the barracks, and in the office

Personally, I hope his words have some effect.

Posted by Athanasis Contra Mundum at Friday, June 04, 2010 No comments: