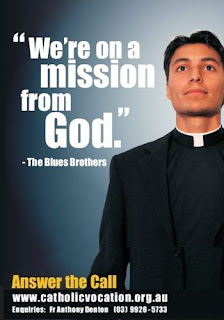 As I was cruising the net I found this vocations poster from the Archdiocese of Melbourne, Australia. I thought it was clever.
Posted by Athanasis Contra Mundum at Sunday, January 28, 2007 1 comment:

This week's Christian Carnival is up. I have a post there, but so does another who thinks that Holy Mother Church is the Harlot upon the Beast in Revelations. Its sad that the only Church which has its authority straight from Jesus Himself should be accused of such a thing.
Posted by Athanasis Contra Mundum at Thursday, January 25, 2007 No comments:

Catholic Carnival 103 is up at Deo Omnis Gloria.
Posted by Athanasis Contra Mundum at Tuesday, January 23, 2007 No comments:

Christians no longer suffer from the persecutions of the Roman or Soviet Empires, but persecutions continue and many Christians suffer under unjust laws that try to force them against Christian living. Most of the attention on this subject is directed towards Muslim nations and groups but persecution also continues at the hands of Hindus in the Indian subcontinent. For example the government of Madya Pradesh in India is trying to impose a false god on all school age children in the state.

Mumbai, Jan 16, 2007 / 02:00 pm (CNA).- The practices of one religion should not be imposed on people of other religions, said a Catholic archbishop in response to a recent government decision to make a Hindu ritual compulsory in all public schools and colleges.

Archbishop Pascal Topno of Bhopal told the Indian Catholic News Service on Monday that he has nothing against Hindu rituals but "people from other communities should be given the freedom and the choice to say no to it.”

The Madhya Pradesh state government announced its decision to hold mass Surya Namaskar recitations in institutions across the state on Jan. 25. Surya Namaskar or Sun Salutation is a prayer offered to the sun god and a main component of yoga.

I don't about you but this reminds me of Nebuchadnezzar's golden statue that he demanded everyone to worship. Shadrach, Meshach and Abed-Nego came to no harm for their refusal to worship a false god. We should stand with Archbishop Topno against this decree. You can write in support to him at:

After all, as it says in 1 COR 12, 26: "And if one member suffer anything, all the members suffer with it; or if one member glory, all the members rejoice with it." With an envelope, a letter and $0.84 for postage you can stand in solidarity with our brothers and sisters in Christ.
Posted by Athanasis Contra Mundum at Sunday, January 21, 2007 No comments:

1COR 12,26: And if one member suffer any thing, all the members suffer with it; or if one member glory, all the members rejoice with it.
HEB 13,3: Remember them that are in bands, as if you were bound with them; and them that labour, as being yourselves also in the body.
Douay-Rheims Translation
Posted by Athanasis Contra Mundum at Sunday, January 21, 2007 No comments:

I chose a random phrase from one of my posts and searched that phrase on Google just for kicks to see if or how high up it would come. I chose "Fr. Ben Uhlenkott" from my "Fed by Christ" post before Christmas. It was number 5. This will probably interest no one, but its my blog and I felt like doing something random.
Posted by Athanasis Contra Mundum at Thursday, January 18, 2007 No comments:

Healing in the Sacraments

"Hardly had I reached the age of discretion when I began to offend You. But You, who had loved me first, had already prepared a remedy for my faults in the Sacraments!"
-- Venerable Conchita

Just like the wounds of the Israelite were healed by the Good Samaritan's oil and wine, we are also healed with oil at our Baptism and Confirmation and wine at Mass. Very often myself, and I imagine many others, forget how wonderful that healing is. God became man and establshed Sacraments to heal us body and soul.
Posted by Athanasis Contra Mundum at Monday, January 15, 2007 No comments: 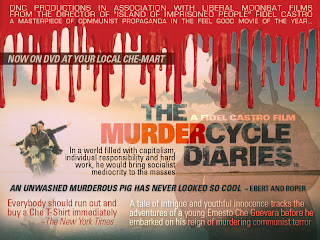 I found these images at Che Mart under the Hollywood Loves Che link.
Posted by Athanasis Contra Mundum at Thursday, January 11, 2007 No comments:

A friend emailed this picture to me: 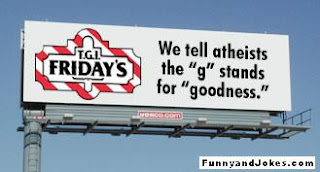 Posted by Athanasis Contra Mundum at Wednesday, January 10, 2007 No comments:

O Sacrament most holy, O Sacrament Divine
All praise and all thanksgiving be ever Thine
Posted by Athanasis Contra Mundum at Sunday, January 07, 2007 No comments:

I was surprised (and somewhat honored since mine is an obscure blog) to find out that the writer and creator who also plays Captain Catholic wrote a comment in regards to my Captain Catholic post. He also left a comment on the Snoring Scholar blog. However, I will only repost the comment that Tony left on 50 Days After:

Hey there! It was interesting finding this blog, because I'm actually the creator and writer of the Captain Catholic series (Tony DeGennaro - I also acted as Captain Catholic in the series). Thanks for the kind words about the series - although yes, as far as the devil horns and hitler mustaches, I wasn't thinking about how they might be offensive when I put them on. The series is primarily targeted towards teenagers, so it's meant to be taken lightly. You have a good point though - people not a part of the discussion group wouldn't know that.

It's hard to script because I want to have the Church's authentic teaching as the main part of the series, but it's hard to target towards teenagers without putting in 'gags' such as hitler mustaches. You're correct, Extra Ecclesia Nulla Salus is an extremely important part of our Church today, something I was thinking about as I made the video - the thing is it's target audience (the 600 teenagers in the discussion group) are mostly liberal teenage pseudo-Catholics - in other words, they need something to bring them back to the Church, and I thought this message would draw them in.

As a fellow Catholic I'd love to have more advice from you. I want to make sure I'm following the Church's teachings, I do hours of research for each episode. My email address is degennaroa2 at scranton dot edu

Also, if you remember from watching the video, the primary idea of the series is the discussion board, which is located here:

There's about 600 members now. I also have a few multi-page essays explaining the purpose of each episode and the Catholic Church's viewpoint. Thanks for watching, take care and God Bless
Posted by Athanasis Contra Mundum at Saturday, January 06, 2007 No comments:

Saint Quote of the Day blog

I discovered a new blog. It features a new quote from a saint every day.
Its called Saint Quote of the Day. Today's quote is from St Therese de Lisieux: "Prayer is an aspiration of the heart, it is a simple glance directed to heaven, it is a cry of gratitude and love in the midst of trail as well as joy; finally, it is something great, supernatural, which expands my soul and unites me to Jesus."
Posted by Athanasis Contra Mundum at Saturday, January 06, 2007 No comments:

"As soon as I see the Host exposed, it is as if my soul flies to Him and adheres to Him like the light to the sun. I care nothing for people and things, only He shines in the depths of my soul dimming everything and playing the divine chord of His love in all my being."
---Concepcion Cabrera de Armida, better known as Conchita

Conchita's writings were the basis for the Missionaries of the Holy Spirit found by Fr. Jesus Felix Rougier
Posted by Athanasis Contra Mundum at Saturday, January 06, 2007 No comments:

Catholic Carnival 100 is up. Just Another Day of Catholic Pondering is this week host. View the carnival here.
Posted by Athanasis Contra Mundum at Tuesday, January 02, 2007 1 comment:

As I was cruising the internet this morning I discovered two videos on google apparently meant as part of a larger series. I linked to them at the bottom of this post. They are the first two episodes of the Captain Catholic series. That's right, Captain Catholic. His tagline is "Love, Hope and the Catholic Way". He quickly changes, like Superman, into a costume with a cape and boots to take on his nemesis. He also has a "Sin Sense" which tingles like Spiderman's "Spider Sense" I included links to both videos on Google Video since YouTube broke each episode into 3 or 4 pieces each. The videos are a bit over the top, but they have some good apologetics. The second video seems to forget Extra Ecclesia Nulla Salus.
The first video is about greed, capitalism and the church's teachings about both. The villain is Dick DeGreedio. Its only about 17 minutes compared to half hour for the second episode.
The second one deals with Sola Fide, Faith Alone. The villain in this episode is Evangelical Earl. Although I do not agree with Sola Fide I do not agree with their treatment of Evangelical Earl. In the video they drew horns on him along with a Hitler mustache. Aside from that crass attack, it would be an enjoyable video.
Its an interesting and somewhat funny way to get Catholic teaching out there. It has potential and I personally would like to see the future videos.