Where to invade next

I'm all for laying the smack down on Iran and/or North Korea, but at least I know the difference between those two and Australia.
Posted by Athanasis Contra Mundum at Friday, September 29, 2006 No comments:

The latest Catholic Carnival is up. You can find it here.
Posted by Athanasis Contra Mundum at Friday, September 29, 2006 No comments:

Lately, I have been stuck on what to write about. I have thought about saying something about the Muslim reaction to the Pope's speech. I have a lot of thoughts about it, but everyone else is writing so much about it. Besides, I think charity would fail me.
I have seen in other blogs that sometimes the authors will start a series on some particular subject. I have thought about different things. I tried posting about a different religious order each week, but that didn't seem like what I am looking for so I have abandonned that.
I have been thinking about writing a series sometime about the Missionaries of the Holy Spirit, especially the mystic woman, Conchita, who inspired Fr. Felix de Jesus Rougier to found that order. I have even thought about writing some posts on the other related orders (La Familia de la Cruz or the Family of the Cross). I feel drawn somehow to them and I feel like the Holy Spirit might be directing me to write about them.
But I have this sort of writing block and I am soliciting suggestions. Let me know what you think and feel free to suggest something else.
Posted by Athanasis Contra Mundum at Tuesday, September 19, 2006 2 comments:

The Catholic Carnival is up. Check it out at Deo Omnis Gloria.com
Posted by Athanasis Contra Mundum at Tuesday, September 12, 2006 No comments:

persecution for His sake

HIstory classes teach us about the great persecutions of the Christian Church in the Ancient Roman Empire, but I find at least that I forget quite easily that the persecution of Christians continues to this day.
Its easy to forget in our daily lives that being a Christian can be difficult. It is always difficult to lead Christian lives, but we don't have persecution on top of it. In the US we might get hassled for being Christian (or unfortunately other Christians hassle us for being Catholic), but we have it easy. But as Hebrews 13:3 reminds us, we should remember the persecuted members of the Church.
Muslim persecution of Christians exists wherever Islam is the dominant religion. From Pakistan to Morocco Christians are persecuted for believing (and rightly so) that Christ is much, much more than merely a prophet.
In India, Christians are persecuted by hardline Hindus. Some Indian states have outlawed conversion to Christianity.
The Berlin Wall may have fallen, but Communist oppression of Christ's Body persist. There are over a billion people in China and about 6 billion in the world. That's right over 1/6th of the world remains under Commie oppression! They not only oppress the Church in China, but try to subvert it with the Catholic Patriotic Association.
Its great that we went across the globe to liberate the peoples of Iraq and Afghanistan, but just 90 miles off of our shores the tyrrany of Communism remains. The Church remains persecuted in Cuba, China and other Marxist nations. Its speaks volumes when people would rather risk drowning, dehydration, storms and hunger to float 90 miles on an inner tube than stay at home.
But enough of the bad news though. We know who will eventually win. Christ has promised us the eternal victory.
But the battle is not over yet and there is much we can do to help our brothers and sisters that we so often forget are still persecuted and often martyred like so many saints before them, including our first Vicar of Christ, St. Peter.
There are many organizations such as the Voice of the Martyrs, the Bible Site, Aid to the Church in Need, and the Cardinal Kung Foundation actively working with the persecuted Church.
We can take comfort in the Church's triumphs over persecution in ancient Rome and the Eastern Bloc (thanks in no small part to our former Pope JPII), but as Our Lady of Fatima reminded us prayer is necessary to avoid even more horrible evils that may come of Communism.
Our Lady of Fatima and St Joseph the worker, pray for us!
Posted by Athanasis Contra Mundum at Monday, September 11, 2006 No comments:

Where do celebrities do when they are no longer in the spotlight?
MC Hammer blogs apparently.
Posted by Athanasis Contra Mundum at Sunday, September 10, 2006 1 comment:

I was thinking about today's Gospel reading. Jesus healed a deaf man and as usual told everyone not to tell. And as usual they went and told everyone they knew.
I wonder sometimes why Jesus told them not to tell others. As God, He had to have known they would tell the whole world (after His death and Resurrection quite literally). So why bother?
My personal theory is that He realized gossip travels faster than any other kind of news. So by telling everyone to keep it under wraps, He might have been encouraging them to speak of Him far and wide...
or perhaps I am just cynical.
Posted by Athanasis Contra Mundum at Sunday, September 10, 2006 No comments:

Labels: Thought of the Day

order of the week

This week is the Society of the Divine Word (Societas Verbi Divinus, aka SVD). SVD is an order founded in Germany during the Bismark era. It survived and even grew despite the Kulturkampf. It is now spread throughout the world and is dedicated to preaching the Gospel to the world.
Posted by Athanasis Contra Mundum at Sunday, September 10, 2006 No comments: 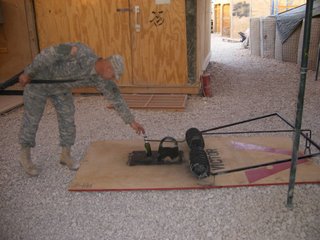 Another week, another order

This week: The Clerics of Saint Viator

It is clerical order in countries around the world dedicated to catechism, education and evangelization.
Posted by Athanasis Contra Mundum at Sunday, September 03, 2006 No comments:

Lord, the wind and waves assault the hull and the sail
Yet, You guaranteed the gates of hell will not prevail
Despite the storm You sleep in the back, unafraid
"Lord Jesus", we cry, "Awake and come to our aid."
On the command of His voice the storm is gone
Even now, we are in awe like Peter and John

Who is this Man who commands and calms the storm
He is the Word made flesh, He is the incarnate Lord
Still today many journey with Jesus in Peter's boat
We journey to our home, Heaven so remote
Still today we hear his words, "Do not be afraid."
Death and pain may come, but He is our aid

Storms and trials will come, but the boat will not sink

Jesus, Son of David, have pity on me!
Posted by Athanasis Contra Mundum at Sunday, September 03, 2006 1 comment:

That's right, search for life (and I'm not talking about SETI). There's now a search engine that donates half of its ad revenue to pro-life organizations.
Posted by Athanasis Contra Mundum at Friday, September 01, 2006 No comments: