So this is my 500th post on this blog. It took me a little over 5 years but I don't post as often as a lot of others and I had gaps in posting while I was deployed. What do I want to talk about in my 500th post... I don't know I am making this up as I go.
OK, here's something: 2 days ago Pope Benedict XVI established a Syro-Malankar exarchate in the US. I wonder how many people before reading this had heard of the Syro-Malankar rite. I found this article on Zenit. The commentary in green is obviously mine.

1st Bishop Will Also Be Visitor to Community in Canada, Europe

NEW YORK, JULY 14, 2010 (Zenit.org).- Benedict XVI erected an apostolic exarchate (I wonder what is the difference between eparchy and exarchate?) for the Syro-Malankara Catholic Church in the United States, and appointed Father Thomas Naickamparampil (appropriate for a priest to St Thomas Christians) of the Major Archieparchy of Trivandrum as its first bishop.

The bishop-elect, 49, was also appointed apostolic visitor for the Syro-Malank

ara Catholics in Canada and Europe.

After completing high school, he joined St. Aloysious Minor Seminary, Pattom, Trivandrum, and then later completed his priestly formation at the Papal Seminary in Pune. He was ordained on Dec. 29, 1986.

He has a doctorate degree in philosophy from the Pontifical University Gregorian in Rome.

The Syro-Malankara Catholic Church traces its roots back to St. Thomas the Apostle (That's right "Doubting Thomas" evangelized India long before the Age of Discovery brought European powers there. I am personally a big fan of his and I think he got a bum rap. He's no worse for his disbelief than Peter for his denials). The Church split from the Malankara Orthodox Syrian Church in 1930, and then entered into communion with Rome. In 2005, the Eastern Church was elevat

ed to a major archiepiscopal Church. It is currently led by Major Archbishop Baselios Cleemis, and currently has eight eparchies and some 500,000 faithful.

The community of Syro-Malankara Catholic Church began to organize in 1984 in New York. Today there are an estimated 10,000 members, 16 parishes and 15 mission stations (The nearest one of these to me is Miami. I am

curious to see their liturgy, but there is a Syro-Malabar parish in Atlanta that I could go to. I would think the liturgy is similiar since they are both St Thomas Christians) of the Church in the United States and Canada. It also counts with 30 priests, and 34 religious.

The new exarchate will have its headquarters in New York City, and the main parish will be the Malankara Catholic Church in Long Island. 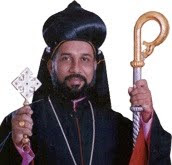 On another note remotely related note, the Syro-Malankar and Syro-Malabar rites are based out of Kerala State in India which is home to Vailankanni, which is a major site of pilgrimage because of the shrine to Mary that is there. I first heard about it right after the tsunami and I have wanted to visit there ever since. Maybe some day I will finally get to go.

May God bless everyone who reads my ramblings,