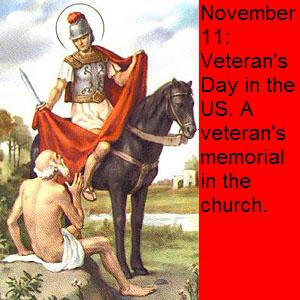 Every year we celebrate Veteran's Day on November 11, but few of us realize that November 11 is also the memorial of Saint Martin of Tours, a Soldier in the Roman Army. He is almost always portrayed as a Soldier on horseback, cutting his cloak in half to share it with a freezing naked beggar. That's because he once cut his cloak in half to give one half to a beggar. Later in a dream, it was revealed to Saint Martin that the beggar was really Christ Jesus.
As a side note, the cloak was kept as a relic. French kings took it with them when they went into battle. The Latin word for cloak is capella (my spelling might be off). And of course priests accompanied the relic and they came to be called capellans, after the relic. The "c" in Latin apparently sound like "ch" in English. So that is where the word Chaplain came from. In a way, he could almost be considered the patron saint of Chaplains. 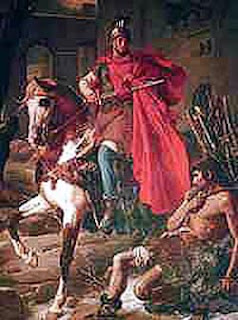 Also, I would point you to point by my good friend from my days in the sem, Matt Libra. He visited the Catacombs of Saint Sebastian, another Saint who was a Soldier in the Roman Army, and Matt has his own Veteran's Day reflections.

A prayer by Saint Martin of Tours:
Lord, if Your people still have need of my services,
I will not avoid the toil.
Your will be done.
I have fought the good fight long enough.
Yet if You bid me continue to hold the battle line
in defense of Your camp,
I will never beg to be excused from failing strength.
I will do the work You entrust to me.
While You command,
I will fight beneath Your banner.

God bless all our vets and soldiers.