Why can't we be ourselves?

Why isn't our group more Catholic in our view of the Scriptures and the Church?

So often when I go to the local Young Adult Ministry, I see and hear so may other Catholics who seem to have become or perhaps always were assimilated into Protestant culture and ecclesiology. I had to restrain myself from laughing when I first went and the seminarian who was at the parish for the summer was announcing a workshop on "reclaiming our Catholic identity". We had after all just sang praise and worship all through Adoration (no Tantum Ergo, no litany, nothing Catholic about it except the Eucharist and monstrance) and had some banal talk on what the Bible passage meant to us (no reference to Sacred Tradition, Early Church Fathers, Doctors of the Church or any other saints, nothing more than what the words meant to everyone). As Catholics, we have tools and resources available to us to make both come more alive and delve deeper than the surface into each (i.e. lectio divina, other contemplative techniques and the liturgy). 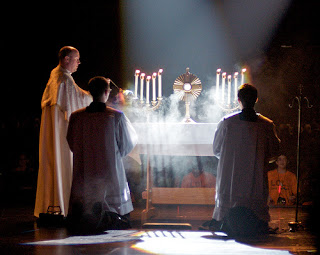 I've talked to the people with the guitars and in fact to anyone else who would listen about more traditional music, possibly Tantum Ergo or a litany. I dare not go so far as to suggest that we have a priest (Btw, I found out while writing this that Adoration is no longer considered a devotion, but is a part of the Church's official liturgy.) who actually brings the Host (instead of a lay volunteer) or even that he should read from the Gospel during Adoration and preach or that maybe he could use (gasp!) incense. Did you know that in the Bible angels worship with incense or that the word incense is in the Bible 129 times? I've talked to multiple people also about incorporating more solid and substantial teachings of the Church into the Bible studies. The response has gone one of two ways: a) Create another group and do it another time. b) There's not enough time.
Would it kill the person leading the study to take 10 minutes to consult a commentary such as Catena Aurea? Or to look through what a Catholic Scripture study group such as Agape Bible Study has to say?
Another example of what I'm getting at is this week's topic, "Growing closer in a personal relationship to Jesus." That theme and the wording are pulled straight from  door-to-door Protestant proselytism. Meanwhile, to my knowledge, as long as I have been a part of this group we've never had a talk on "Covenant and Sacrament" or "Experience of God as the Mystical Body of Christ" or "Union with Christ in the Eucharist" or "Marriage and Eucharist as Sacraments of Covenant and Renewal".
I've tried to steer our conversations towards what Tradition teaches and what Church Fathers/Doctors of the Church have to say, but I get a mixed bag of blank stares, rolled eyes, sighing, and pushback. I just can't grasp why we as Catholics seem so reticent to worship and pray to our God in a way consistent with our identity as Catholics. Why can't we be ourselves? Why are we afraid to worship and draw nearer to our God in the Catholic way; in a way that goes beyond praise, that transcends and brings Heaven and Earth together? Why do we always go back for more ice cream (see #2) when we have a steak dinner so near to us?
To be fair, its a problem well beyond the confines of that group. The local St Joseph Parish might be mistaken for a mainline Protestant church. The sign out front and the discreet confessionals (although I'm told Anglicans have these too) in the back give it away. I've seen many other parishes like it. There isn't the traditional artwork and statuary that point to the glory and majesty held within the tabernacle of the parish. There is little in the way of artwork to teach the stories of the Bible and the Church or provide assistance in contemplation.


So I ask, why can't we be ourselves?

Why have we become so assimilated into Protestant culture, theology and worldview?
I've heard Vatican II get the blame, but honestly if you read it you would no longer say that. There's as much ressourcement as there is aggiornamento. I personally think its the absence of catechesis from Catholic sources. 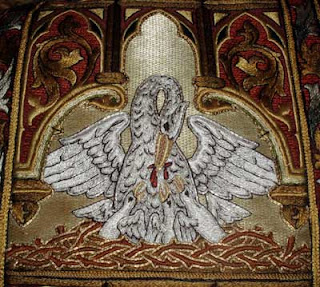 In short, why can't we be ourselves? Why can't we worship and pray as our fathers and grandfathers did, in ways that had been handed down from the Apostles who received Jesus' teachings and revelation firsthand? Why do so many of us not want to worship in the way that Heavenly worship is described in Isaiah and Revelation?
I am off my soapbox for now.

source for the Adoration picture
May God bless all who read my ramblings,

The one thing I will say is that there are a growing # of Catholic artists getting air play on Christian radio, too, and that's all to the good. I get frustrated too, by the lack of passion and prioritizing shown by Catholics--but all I can do is try to change it within my sphere of influence.