We've probably all heard or read the story about the dream with two sets of footprints (the author's and the Lord's) and then there was suddenly one set because the Lord was carrying said person.
There's a church in Italy that has preserved footprints said to be those of Jesus Christ. There's a story with these footprints too. 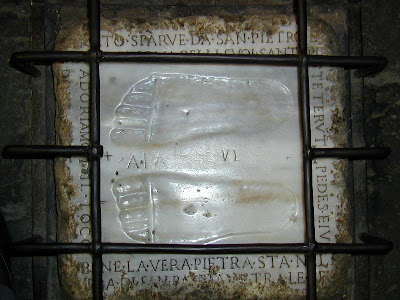 During a persecution of Christians, Peter was said to be fleeing Rome when he came upon Jesus walking towards Rome. He asked "Quo vadis Domine?" (Where are you going Lord?) Jesus responded, "To be crucified again." Peter having been admonished returned to Rome to face the persecution and eventually to be crucified upside down on Vatican Hill.
I don't think Peter would have spoken to Jesus in Latin, but the people recording the story would have passed the story on in Latin. Also, the question is the source for the name of a great book and a classic movie based on the book.
I found the picture here.