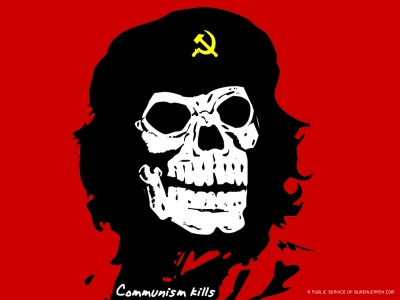 This is another instance of people should think before they comment. You have all the time in the world to think it over before you hit the submit button. Over at Being Frank there was a post by Filia Day about Che T-shirts, which I have posted about before. It was a thoughtful post and I really enjoyed it, however one of the comments left me shaking my head in disbelief.
Mr Sullivan, it seems has not caught on that Communism is bad. He went on to suggest:"Why not reclaim Che’s face by seeing it as a icon of Christ - the good things Che did by Christ working thru him ?"
Let me say at this point that I wish Mr Sullivan well. I pray for him and I am sure that he is a decent well meaning guy, but his comment has provoked within me a need to rant. With that said, we now return to the post/ranting.
As for the atrocities that Che committed in Africa and throughout Latin America he says simply: "But, hey, that’s nothing more than the Jews expected the Mesiah to do to his political enemies (and when he didn’t you can see why they thought he wasn’t really the Messiah). And king David lined up his enemies and systematically executed every third man.
Pot, kettle, black." 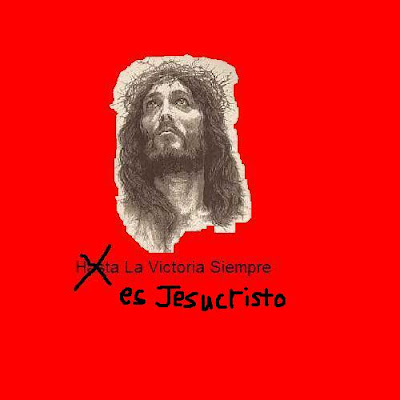 Let's not mention that while comparing Che to Christ, Mr Sullivan makes no mention that Christ in all His righteousness never laid a hand on any of His enemies while He walked the Earth. As for King David, I admit I don't have a clever comeback, but that's not to say that it justifies Che's murders in any way.
Che's mission in life was to establish a utopia where men and NOT God become the height of all existance. He and his ilk sought to eliminate the divine from every facet of humanity, though some regimes tried to replace religion with philosophies i.e. Il Juche (N. Korea) and the New Man Philosophy (Che Guevara). Marxism failed of course, not the least of the reasons because men and women pitted their weak, frail humanity against an omniscient, omnipotent God.
Even after Mary's warnings at Fatima, the fall of the Berlin Wall, the end of the Cold War and the countless revelations of atrocities and sundry evils conducted by Communist governments around the world some people seem unable to believe Communist not only does not work, but it is just as evil, if not worse, than the Nazi regimes of Hitler, Mussolini and Hirohito. The Black Book of Communism does a great job of revealing the brutality and evil of the world's Marxist governments. So do the recently opened archives in Berlin and Moscow among others.
Worse yet, some people such as Mr Sullivan seem to think Marxist Socialism is somehow similar, even compatible with Christianity (of course most claim that it is because of the theoretical endstate of Communist utopia). I personally don't understand how atheism is compatible with any religion, but the delusion persists to this day.
I understand and indeed I believe that the Communist system described in the Acts of the Apostles is ideal. However, with that said, the Communist system described in the Communist Manifesto is set against the Apostolic Communist system. The Manifesto is very clear (yes, I have read it, unlike many Communists) that 1) revolution is needed to establish Socialist states as a stepping stone to Communism (each according to his needs) and 2) God is a human invention and detrimental to human progress.

The Apostolic system that was Mr Sullivan mentioned and compared to the Marxist ideal system was not established by shedding anyone's blood. And certainly it recognizes that mankind is God's invention and essential to human progress. Not to mention that while Marxism sees Communism as the end state, the Apostolic system realizes that it is only the best possible system on Earth while we await the joy of Jesus' Heavenly Kingdom.
In short Communism is pretty much the Christian ideal perverted. While it may have similarities to Christianity, seeing more than just coincidental similarities can lead you down a dangerous slippery slope that may leave your soul in mortal peril.
As generation upon generation of Christians have discovered over the last 2,000 years Jesus is the only source of eternal joy and happiness, not some political/philosophical system.
St Joseph the Worker pray for us and for an end to Marxism in the few nations where it prevails and in free nations where people believe in its false promises.
Our Lady warned us about 90 years ago, but I guess not everyone got the memo.

I got the picture from Protest Warrior
Posted by Athanasis Contra Mundum at Saturday, August 25, 2007