"And as Moses lifted up the serpent in the desert, so must the Son of man be lifted up" John 3:14
I like this quote not just because of the imagery and that I could meditate on this forever, but it almost seems to me that its like John 3:16's lesser known brother. Anyways, enough rambling... 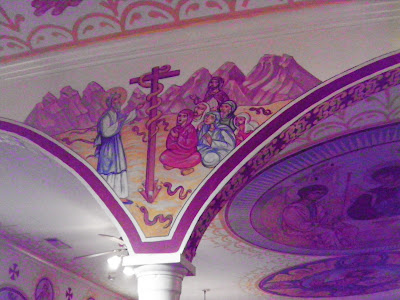 I took this picture this morning (before Orthros and the Divine Liturgy) at my parish, St Ignatios. I like how it takes the quote and gives a visual representation linking the Old Testament story with the verse from the Gospel of St John.Of course the Son of Man lifted on the cross heals primarily our souls while the snake on the staff was solely a physical healing from the scourge the LORD had sent upon them.
I wish to point out that there are many parallels drawn between Jesus and Moses. The Exodus is very often cited as a parallel to the Christian experience. Slavery in Egypt is akin to our slavery to sin before baptism. The parting of the waters and washing away of Pharaoh's army is symbolic of our baptism and the washing away what held in slavery to sin. On our journey to the promised land, a.k.a. Heaven, we are afflicted because of our sins/grumbling/doubting. Just as the Israelites were healed by the snake on the staff.


Then they set out from Mount Hor by the way of the Red Sea, to go around the land of Edom; and the people became impatient because of the journey. The people spoke against God and Moses, “Why have you brought us up out of Egypt to die in the wilderness? For there is no food and no water, and we loathe this miserable food.”
The LORD sent fiery serpents among the people and they bit the people, so that many people of Israel died.  So the people came to Moses and said, “We have sinned, because we have spoken against the LORD and you; intercede with the LORD, that He may remove the serpents from us.” And Moses interceded for the people. Then the LORD said to Moses, “Make a fiery serpent, and set it on a standard; and it shall come about, that everyone who is bitten, when he looks at it, he will live.” And Moses made a bronze serpent and set it on the standard; and it came about, that if a serpent bit any man, when he looked to the bronze serpent, he lived. Numbers 21:4-9

The part about Moses interceding on their behalf reminds me of Jesus' parable about the fig tree:


And He began telling this parable: “A man had a fig tree which had been planted in his vineyard; and he came looking for fruit on it and did not find any.  And he said to the vineyard-keeper, ‘Behold, for three years I have come looking for fruit on this fig tree without finding any. Cut it down! Why does it even use up the ground?’ And he answered and said to him, ‘Let it alone, sir, for this year too, until I dig around it and put in fertilizer;  and if it bears fruit next year, fine; but if not, cut it down.’” Luke 13:6-9

I think that what I mean is self-evident. On that note, I'll quit rambling and leave you to think on this if you will it.

Trying out a new button for this

We just studied Moses and the Burning Bush with our homeschooling Bible Study - and my daughter LOVED it. Now, it's time for me to bring the Bible back out, since I'm not familiar with this story of the serpent.

Thanks so much for teaching, and for stopping by Saints and Scripture Sunday!