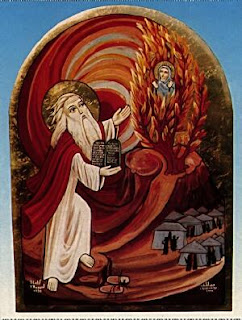 The picture above has a woman's face in the middle of the burning bush that Moses saw. The woman is Mary, the Theotokos. Many of the Church Fathers compared Mary to the burning bush because, even though she was pregnant with the Incarnate Word, she was never consumed and her nature remained unchanged.St Gregory of Nyssa said “What was prefigured at that time in the flame of the bush was openly manifested in the mystery of the Virgin … As on the mountain the bush burned but was not consumed, so the Virgin gave birth to the light and was not corrupted.”

How totally cool! Love that icon.